Bell & Ross was founded in 1992 by designer Bruno Belamich and business graduate Carlos Rosillo. Their surnames provided the source of the watch company’s nomenclature. 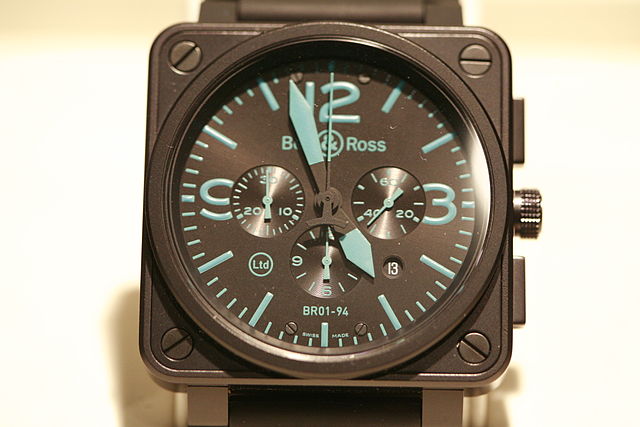 The company initially consisted of a team of designers as well as specialists from the field of aerospace. At the outset, the company focused on supplying watches for military and professional use. It was only in 1994, two years after inception, that the company began selling timepieces to the general public.

The initial Bell & Ross models drew heavily on the expertise of the German watch brand, Sinn, and some of the early watches featured both company’s brand names on the dials. The relationship with Sinn ultimately came to an end when Bell & Ross opened its own production facility in the watchmaking city of La Chaux-de-Fonds in 2002.

Chanel, the famous luxury maison, became a stakeholder in Bell & Ross in 1998, signalling a vote of confidence in the future of the brand.

Part of the appeal of Bell & Ross has been the robustness of its watches used by specialist bomb disposal teams, astronauts, divers and pilots. A perfect illustration of this tolerance to extreme and harsh environments was the Hydromax 11100M. This watch was capable of withstanding pressures of 1,110 bars, the equivalent of diving to a depth of 11,100 metres. Part of its remarkable ability to explore oceans deep was attributable to a special oil which completely filled the interior of the watch. The result was a watch which delivered incredible legibility underwater.

The BR 01 was launched in 2005 and delivered a unique mien. While many other watch brand’s offered pilot’s watches, Bell & Ross broke new ground with the release of this watch. The BR 01 resembled a cockpit instrument, presented in a square case with rounded corners.

Bell & Ross initially launched the model in both three-hand variants as well as chronographs. However, the marketing savvy brand soon capitalised on the demand for the innovative model, releasing variants with brightly coloured hands and various case finishes.

In 2007, Bell & Ross ventured into the world of high complications, releasing the BR 01 Tourbillon which continues to feature within the brand’s range. This watch features a carbon fibre dial, together with carbon fibre main plate and bridges, housed within a DLC coated titanium case. The tourbillon is openly revealed on the dial, positioned adjacent 6 o’clock. The hours are indicated with a sole hand on a subdial below noon, while the regulator-style minute hand dominates the central dial display.

The diameter of the BR 01 measures a substantial 46mm. Bell & Ross went on to release the BR 03, measuring 42mm, proving a more wearable option for slender wrists.

The creativity of Bell & Ross has shown no signs of abating with the release of new versions of the BR 01, not only including complications such as a power-reserve indicator, a GMT and large date display, but also new designs which emulate various cockpit instruments. Indeed, watches which resemble radars, compasses, altimeters and airspeed indicators have all provided inspiration for the creative minds at Bell & Ross.

The appeal of vintage aesthetics has not been overlooked by Bell & Ross. The Vintage collection takes inspiration from watches of the 1940s, absent of any patina. The watch company offers a choice of automatic models incorporating small or central seconds displays, together with date indication. In addition, chronographs with bi-compax dial designs also feature within the collection.

Where Bell & Ross strays from the sepia character of some Vintage BR models is by embracing modernity with case finishes such as black PVD and brightly liveried dials.

The ultimate expression of nostalgia is accorded with the Vintage WW1-92 which captures some of the styling of the 1920s and includes wire lugs, a triangular index at noon and the indication of minutes adopting greater prominence on the dial.

Bell & Ross has always celebrated its links to aviation, taking inspiration from cockpit instruments and the watches worn by pilots. Its range of models is diverse employing an array of case finishes, dial designs and complications, often delivered at accessible prices.