Omega is one of the best known and most respected luxury Swiss watch brands in the world today. The brand has a rich horological heritage, dating back to the late 19th century. It continues to marry its heritage with innovation, creating some of the most expertly crafted timepieces on the market today.

In this article we’ll look at how Omega came to be the brand it is today, and we’ll take a look at five of the most popular Omega watches.

Omega’s history stretches back to 1848 in the Swiss town of La Chaux-de-Fonds, where Louis Brandt first opened his workshop. In 1880, the growing business moved to Biel in the Canton of Bern, where Omega’s headquarters remain to this day.

Under the management of Louis Brandt’s sons, the company produced the first Omega movement in 1894. The name, Omega, the last letter of the Greek alphabet, symbolised the company’s efforts to reach the pinnacle of horological prowess.

Omega’s achievements and recognition did not stop there, and the twentieth century saw the brand tot up a number of impressive accolades. Towards the end of the First World World, the British Royal Flying Corps selected Omega as the official manufacturers of timepieces for its combat units in 1917. The U.S. Army followed suit the following year.

Omega continued to develop the accuracy of their instruments over the next couple of decades. Their efforts were rewarded in 1936, when Omega was awarded the world record for precision, achieving a score of 97.8 out of 100. The record stood unbeaten until 1965.

Since the heady times of the first moon landing, Omega has maintained its global reputation through its close ties with the world of sport. Today, Omega remains the official timekeeper of the Olympic Games – an honour they have held since 1932 – providing the precision and reliability required by the world’s elite athletes.

In 1995, Omega became the brand worn by Agent 007 in the James Bond films – replacing Rolex for the first time. For James Bond fans and watch lovers alike, this was, naturally, big news.

Over the years, Omega has attracted a wide range of famous wearers including the likes of John F. Kennedy, Elvis Presley, and Prince William.

Now you know a little more about Omega’s history, let’s turn to take a closer look at some of their top watches. 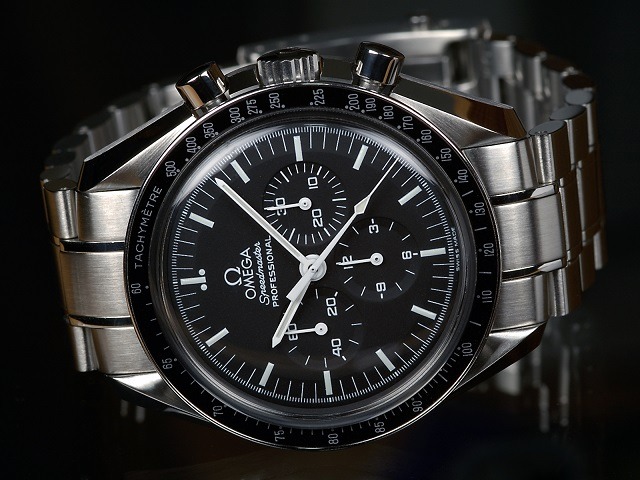 The Omega Speedmaster is generally recognised as Omega’s most well-known and loved watch, and there are numerous models available on the market today. Famously worn by the astronaut Buzz Aldrin on the first manned lunar landing in 1969, the Omega Speedmaster became known simply as ‘the moonwatch’.

The latest model on the market, the Speedmaster Professional Moonwatch, differs slightly from the original Moonwatch, offering a charming moonphase complication. One of the earliest known watch complications, a moonphase displays the sunlit portion of the moon as observable from earth on the dial of the watch. Look closely at the moonphase on one of these, and you’ll see Neil Armstrong’s footprint (blown somewhat out of proportion!).

Made of stainless steel, the Speedmaster Professional Moonwatch comes with a black dial, hesalite crystal lens, and a black bezel with a tachymetric scale. It’s water-resistant to 50m. 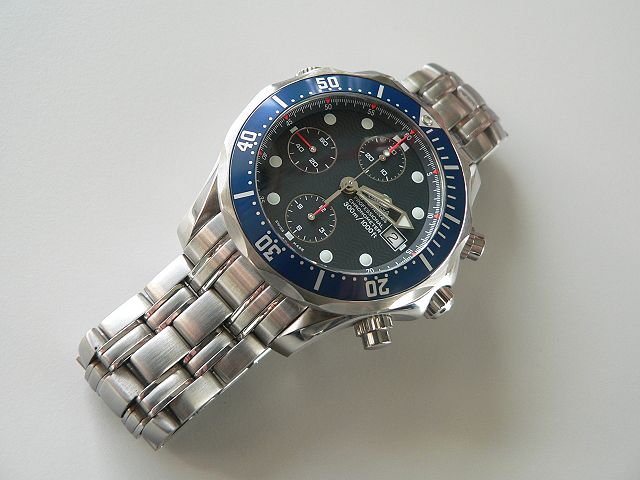 The Omega Seamaster is Omega’s longest-running product line, and has been in production since 1948. Its original design was based on designs for the British Royal Navy at the end of the Second World War.

Released in 1993, the Omega Seamaster Diver 300M has been developed over 25 years whilst remaining true to its original spirit. Sized at 42mm, it’s powered by the Master Chronometer Calibre 8800. It features the date at 6 o’clock, and a gas release valve to meet the needs of saturation divers.

Since 1995, the Omega Seamaster has been the watch of choice for Agent 007 in all new James Bond movies. According to Omega, the Oscar-winning costume designer Lindy Hemming said, ‘I was convinced that Commander Bond, a naval man, a diver and a discreet gentleman of the world would wear the Seamaster with the blue dial.’

The Seamaster Diver 300M made its debut in GoldenEye with Pierce Brosnan playing Bond. It has since made appearances in Casino Royale with Daniel Craig in the role. 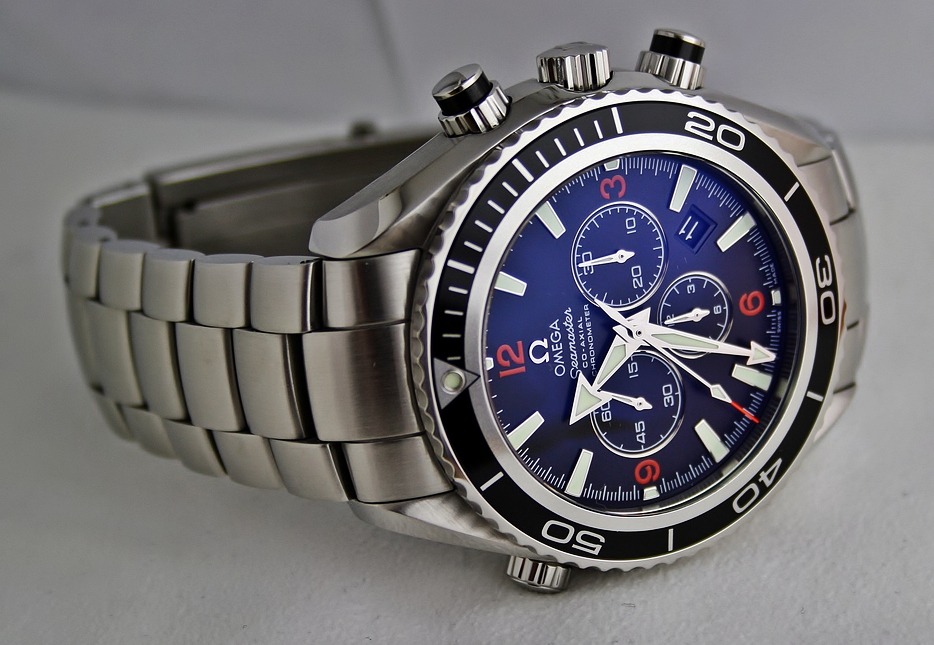 First released in 2005, the Omega Seamaster Planet Ocean 600M boasts incredible water resistance, and Master Chronometer certification. The movement passes eight tests by the Swiss Federal Institute of Metrology (METAS), and is resistance to magnetic fields of up to 15,000 gauss.

A Super-LumiNova coating on the indexes, hour hand, minute hand, and second hand make them glow in the dark for enhanced visibility in underwater or dark conditions.

The Planet Ocean 600M is another of the Seamasters to have made appearances in recent James Bond movies, including the 2008 Quantum of Solace. 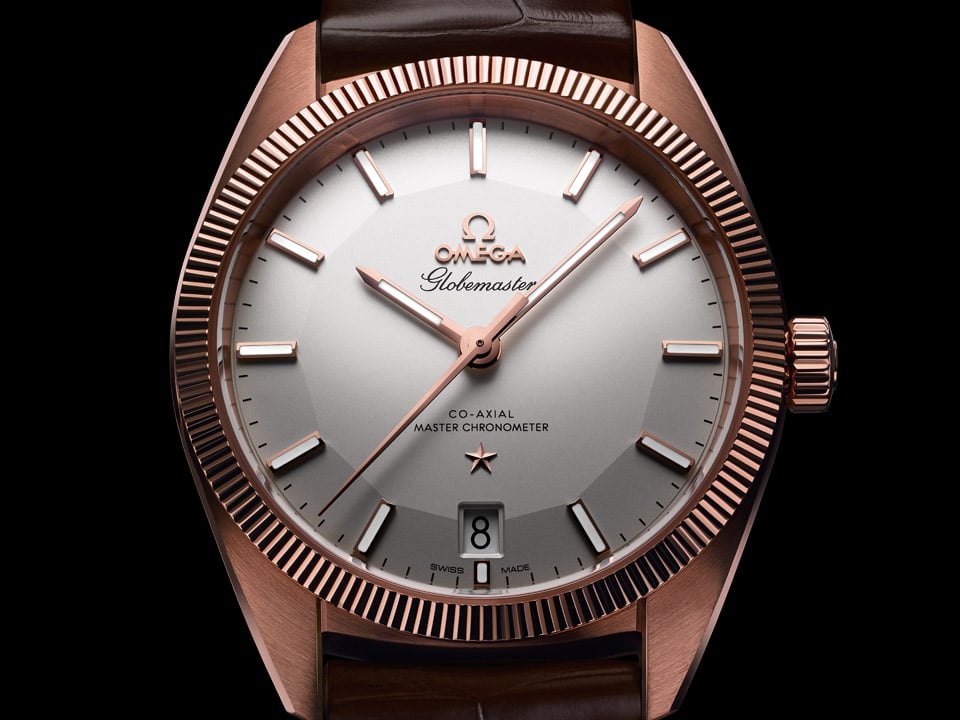 The Omega Constellation was released in 1952 to mark the 100th anniversary since the brand’s beginnings in La Chaux-de-Fonds, and has endured as one of Omega’s most popular and most recognised watches.

Available in both men’s and women’s designs, since 1982 most Constellation models are characterised by their unmistakable ‘Griffes’ or claws as 3 and 9 o’clock, as well as the star symbol at 6 o’clock on all Constellations. Model and actress Cindy Crawford has famously worn the Omega Constellation for many years, acting as an ambassador for the brand. 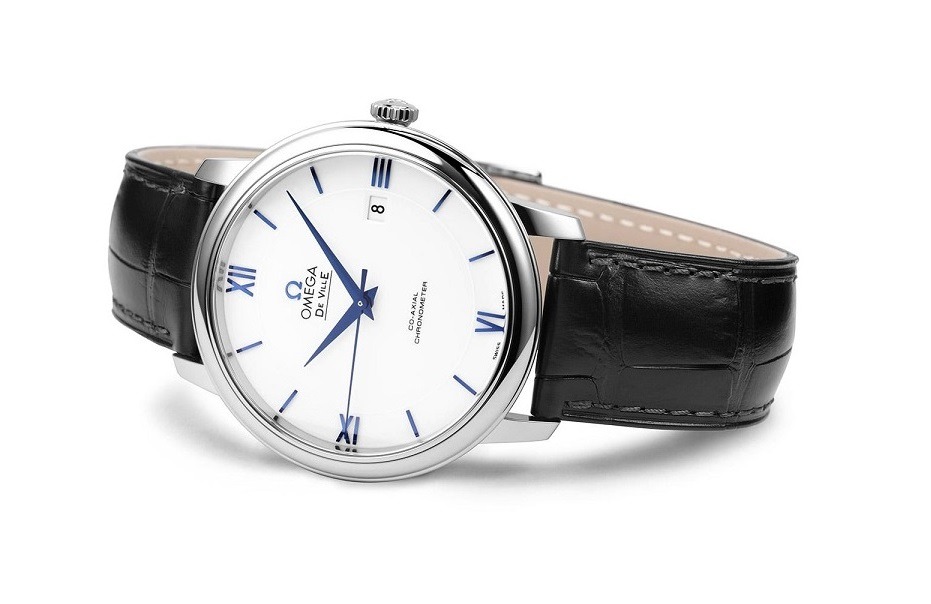 At the heart of the watch is the Co-Axial calibre 2500 movement, featuring the revolutionary escapement developed by master craftsman George Daniels.

The Omega De Ville Prestige Co-Axial 39.5mm is available in a wide range of materials including white, red, and yellow gold, and stainless steel models that blend stainless steel with 18k red or yellow gold. It is generally paired with a leather strap to finish its classic look.

Blowers Jewellers stock a wide range of pre-owned Omega watches. Browse our selection today. Looking for a specific model? Get in touch and we will endeavour to source it for you.