The Omega Constellation has always proved a popular choice with female clientele, with Cindy Crawford being a prominent wearer of the watch for many years. Today’s collection of Omega Constellation ladies’ models is extensive, with numerous variants available. Prospective purchasers can choose from mechanical and quartz models, different case sizes, various materials, and gem-set versions which grant an air of indulgence.

Released in 1952, the Omega Constellation is based on Omega’s 100th anniversary ‘Century’ limited series – a chronometer that proferred excellent precision.

An image of the Geneva Observatory beneath a star-filled sky was depicted on early versions of the Constellation’s case back. This particular observatory was selected because, in 1951, Omega achieved new levels of precision in chronometric tests at the institution. The inclusion of a lone star on the dials of modern-day Constellation models can be traced back to the scene on the case back of the initial 1952 model.

Blowers Jewellers stock a range of unused and used Omega Constellation watches. All our watches are serviced by our team of experts where required. For further peace of mind, our watches are sold with a minimum 1 to 5-year warranty. Browse our range below. 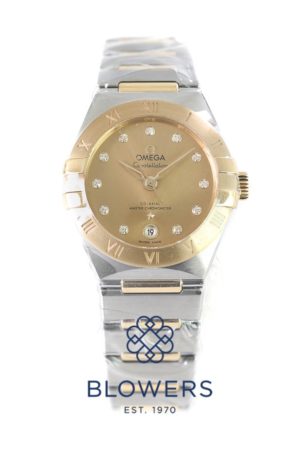