The Omega Seamaster was inspired by the waterproof watches made for the British military towards the latter part of World War II. From the outset, the watches offered the convenience of self-winding movements and robust construction. The Seamaster was launched in 1948, the same year the brand celebrated its 100th anniversary. Notably, the Seamaster has been the preferred timepiece of the all action-hero, James Bond, with Omega releasing the occasional limited edition watch, to celebrate the work of the fictional naval commander.

A key attribute of the Seamaster was, and still is, its impressive water resistance. Observing the rubber gaskets fitted to submarines, Omega ingeniously adapted the idea, equipping the Seamaster with a rubber O-ring to prevent water ingress.

The Seamaster Planet Ocean was first released in 2005 as a contemporary men’s diver’s watch with a maximum water resistance of 600 metres. Later the range was extended to include chronograph, GMT and ladies’ models. Some of the Planet Ocean models feature bezels incorporating Omega’s Liquidmetal® know-how, delivering a smooth, scratch-resistant bezel surface which looks particularly attractive.

Blowers stock a number of Omega Seamaster watches as well as the Omega Planet Ocean chronograph. All our watches are serviced by our team of experts where required. For further peace of mind our watches are sold with a minimum 1 to 5-year warranty. Browse our range below. 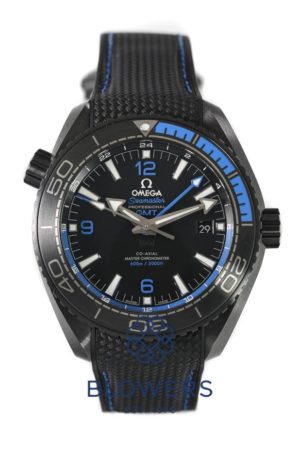