Piaget, the prestigious practitioner of Haute Horlogerie, is one of the oldest watch manufacturers in Switzerland. It was founded in 1874 by Georges Édouard Piaget in his family home located in La Côte-aux-Fées, in the canton of Neuchâtel. Similar to other companies in the Swiss Jura, it began its life as a movement manufacturer. Its reputation for high quality led the company to supply several prestigious watch companies with its revered movements. 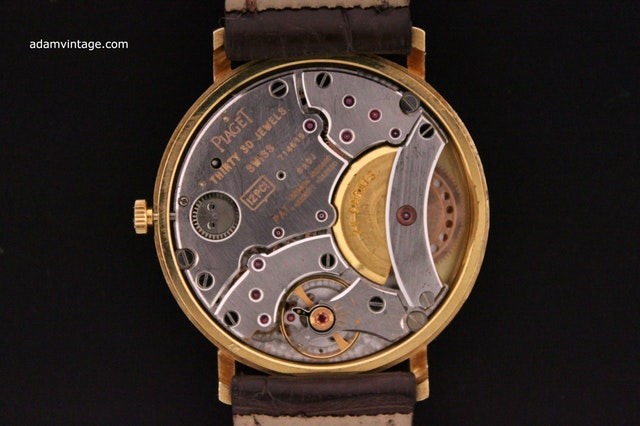 However, it wasn’t until 1943 that the Piaget brand name was registered and the company commenced signing all its movements with its nomenclature, making it a manufacturer of complete watches.

Today, Piaget has a modern, state of the art production facility in Plan-les-Ouates on the outskirts of Geneva. Here cases and bracelets are made, as well as the final assembly of the company’s timepieces. However, movement production continues to take place in the company’s birthplace of La Côte-aux-Fées.

A key aspect of Piaget’s brand personality is the company’s penchant for ultra-thin watches. This can be traced back to 1957 with the release of Piaget’s legendary Calibre 9P hand-wound movement which has a depth of only 2mm.

Over successive years, Piaget released the Calibre 12P, the world’s thinnest automatic movement with a thickness of 2.3mm. Moreover, it has never ceased pushing the boundaries of what is technically viable in terms of slender watches. Recently, in 2014, Piaget released the Altiplano 38mm 900P. This timepiece garnered much attention among the assembled journalists at SIHH 2014 (Salon International de la Haute Horlogerie) in Geneva. The complete watch was billed as ‘the world’s thinnest hand-wound mechanical watch’, measuring only 3.65mm in depth.

Interestingly, Piaget’s creative minds conceived a novel approach to achieving the svelte case profile. The caseback of the watch also doubles as the mainplate with the various movement components mounted upon it. By combining the roles of caseback and mainplate, Piaget has arguably pushed the notion of thinness to the absolute limit, albeit only time will tell whether its amazing world record will ever be surpassed.

However, to focus merely on the lithe character of Piaget’s models would be an injustice. The maison is renowned for producing complicated watches such as minute repeaters and tourbillons. Its gem-set creations are the envy of many aspiring actresses and have even been known to grace the wrist of Elizabeth Taylor. The company’s horological prowess was also called upon to help restore the iconic clock, Torre dell’Orologio on St. Marks Square, Venice.

Finally, one must consider Piaget among the elite of Swiss watch manufacturers, evidenced by its matchless movement finishing. Circular-grained wheels, perlage and anglage are all products of time-served artisans expertly applying hand-tools with adroit skill. Thermally-blued screws, Côtes de Genève motif on bridges and oscillating masses sporting the brand’s legendary coat of arms are further testament to the no-compromise creation of Piaget watches. With a wealth of knowledge and in-house expertise, it was inevitable that Piaget would ultimately attract the attention of a large luxury group and it is longer owned by the Piaget family but the prestigious Richemont Group.